The people at Nairns sent me a couple boxes of Oat cookies to review--Stem Ginger and Mixed Berry.   These cookies are all natural, wheat-free, and made with whole grain oats.

From the Nairns website about the benefits of oats:
There has been a great deal of research into the positive health benefits of oats. Oats are high in fibre and contain complex carbohydrates which have the amazing capacity to sustain and slowly release energy, which helps you get the most out of your day. We work hard to make sure that all that oaty goodness stays in all our naturally energising products, without ever compromising on taste

The box contains four small packs of 5 cookies, for a total of 20 cookies in the box.   I actually like the four separately wrapped packs, and think it would help the cookies stay fresh longer.  A serving is two cookies and contains 90 calories/4g of fat.  Each cookie is about two inches in diameter.

First I tried the Ginger Stem cookies.    They had a strong ginger smell right out of the pack so I knew they would be strong tasting, and they were.  If you like ginger, these cookies are for you.  They have an almost overpowering ginger flavor to the point that the spice burns in your mouth.    Of the two cookies that we're sent, these were not my favorite   I even let my son try one and he made a funny face after biting into one.

The other cookies, Mixed Berry, we're much better.     They had a nice fruit sweetness taste and were enjoyable.   I could see eating a couple of these as a mid day or late night snack.   I had to read the ingredients to see what fruit was actually in the cookie and it appears that they contain dried cranberries and raspberry purée pieces.

Race for the Cure

Last week I signed up and ran our local Race for the Cure.  It is probably the biggest 5K in our area and the after-race free gifts from sponsors cannot be beat--cookies, chips, travel bags, granola bars, coupons, and yes, even toilet paper.

My goal was to break 30 min and I just missed, finishing in 30:15.  There were a lot of walkers and I was dodging people for the first mile or two.   I was impressed by a lady pushing a triple-stroller in front of my pretty much the whole way.

I ran for my friend Jana, who was recently diagnosed with breast cancer, and my thought was to run the race in her honor (they have bibs you can fill out "Running in celebration" or "running in memory" and pin to your shirt, and to pray for her throughout the run, and then send her a note afterwards with the bib letting her know she was in my prayers.   Well right after the race I ran into her!  It was so cool to see her and give her a hug and hand her the bib with her name on it.

This is a really fun race to do because of the cause, the number of people, and all the pink.   Here are some pics from race day: 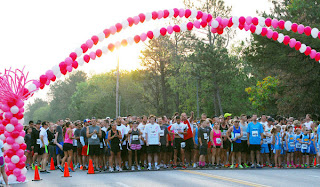 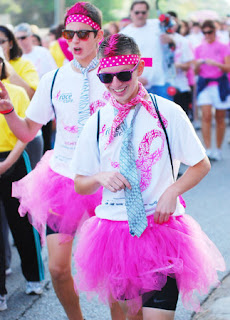 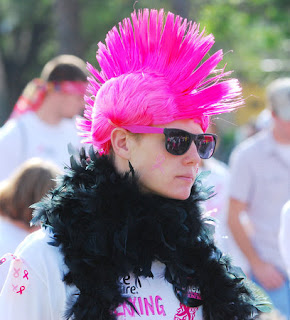 My own 5K and Biggest Loser peeps in town

This past weekend, two former Biggest Loser contestants--Ken and Austin from season 11--were in town.  They spoke at both of my kids' schools, and partnered with a local church to do some seminars on health and fitness.    They also participated in a 5K race Saturday morning.

I went back and forth in my head whether to do that 5K or not.  If my son would have ran with me I would have done it, but he had his 1st soccer game of the season on Saturday and wanted to save his energy.     I decided to not to the official race instead to do my own 5K.     I ran the same route for the Hammer It 5K race I've done a couple times that runs right past my house.  The start/finish lines are still marked with spray paint on the road.   My goal was to break 30 min, but I just missed, finishing at 30:40.    Still, I felt pretty good afterwards, and I saved the $20 5K entry fee.

After my son's soccer game, we went to a seminar on health with Ken and Austin.  They gave a lot of great tips and advice on eating healthy.    We love watching the Biggest Loser.  Ken and Austin started Biggest Loser at 377 and 396 pounds, but said at their heaviest they had both been well over 400 lbs.  (450 and 430).  By the end of the show, they had gotten down to 222 and 219, respectively, losing about 43% of their weight.   They shared a lot of behind-the-scenes stuff about the Biggest Loser at the seminar too.  One interesting fact is that a week is not always a week on the show  for weigh ins.   Because of filming crew schedules and the union, etc, most of the time a week is 10 or 12 days.   So when someone loses 10 lbs in a week, they usually had longer than 7 days to lose that weight.    Here is a picture we took with them: 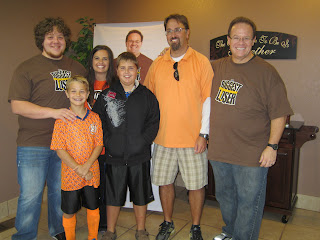 My son's school does a running event each year as a fundraiser for the PTO, so that the kids don't have to go door to door selling candy/magazines/christmas trees, etc....They have a 5K and 2 mile race, as well as a 1 mile fun run.   My son and I have done the 5K race the last couple of years.   2 years ago (when he was 8 yrs old) we ran together and finished in about 33 min.   Last year I had been battling injuries and not running so my son finished in 29 min and I was about 37 min.    This year, I was debating whether to even do the race because I only started running again about 2 weeks prior to the race, but in the end I decided to do it.  I finished in 35 min and my son improved on him time once again, finishing in 27:44.      He was the first grade school age finisher.

The course is a cross country course, with rolling hills and a uneven surfaces, which made it a bit trickier.   Also, there was a huge thunderstorm about an hour before the race (I thought they were going to call off the race) that created muddy surfaces and standing pools of water that you had to jump over in a few spots.
Thankfully the rain stopped falling long enough for us to get the race in, and then is started raining again.   It was a fun event.  The high school cross country team always does it together and they usually beat everyone else.   I was a little disappointed that they didn't have participant medals this year, as they have in the past.  Instead they gave out rubber bracelets.  I also thought they should have age group awards, which they didn't.

I have been running about 4-5 days a week for the last couple weeks, and so far my lower legs/feet feel okay.  I hope to continue running with hopes of shedding a few pounds and doing some more races in the future. 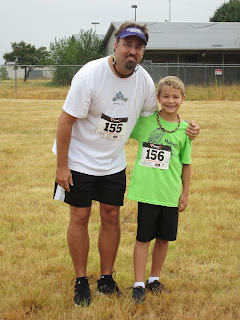 Run For Your Lives

Okay, so I have been a non-blogger for awhile now, mostly because life and work have been super crazy busy.   But, mostly prompted by a weight loss contest at work, I've started running again and I've lost 24 pounds in the last 2 months.   I have resigned myself to being a slow runner and having plenty of rest days for my body to recover.  Staying healthy is key, which can be tough because running is hard on the body.

A co-worker who has taken up running alerted me to a new 5K Race where you get chased by zombies called Run For Your Lives.   Looks fun.  Check out the video.

I am still alive. Barely.   I haven't run in a very long time, so I haven't felt the need to blog.  This is a running blog after all.  My last 5K was about a year ago and I haven't run much since.  First it was my lingering foot injury.   I've been to the podiatrist a couple times, wore some custom inserts for awhile, and did some stretching exercises twice a day.   When it seemed like my foot was feeling better, the "Midwest Heat Wave of 2011" kicked in, and I didn't feel like doing anything but staying inside with the AC cranked drinking lemonade.   So I didn't run.   And I've gotten out of shape.  And it showed in yesterday's 5K.
My son's school does a 5K and Fun Run as a fundraiser each year, and I tried to talk my 9 year old into doing the 2 mile or 1 mile, but he wanted to tackle the 5K again.  He totally killed it. sub 30 minute 5K on a cross country course with a few rolling hills.   I didn't see him after about a mile.  I was sucking wind, had to walk-run-walk-run the whole way, and finished about 7 minutes behind him.    He was the first kid from his school to finish.   I told him afterwards that I was proud of him and that it was official---he was faster than me now.
Yesterday was a gut check and a reminder to me that I need to get out there again and run, even if it means I'll be starting over.  Hopefully that means I'll be getting back in shape and blogging again soon.
Posted by Oz Runner at 6:27 AM 16 comments: 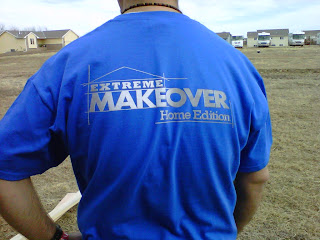 Okay, not quite yet....but, the Extreme Makeover crew with Ty Pennington is in town to build a house for a well deserving family and my wife and I took the opportunity to serve together on the project.  We were actually the very first volunteer group.  There were 20-25 of us, and it was all very secretive and hush hush so they could surprise the family. We were told to check our email at a certain time and be ready to spring into action.  And we were.  The weather was great and we had a lot of fun. 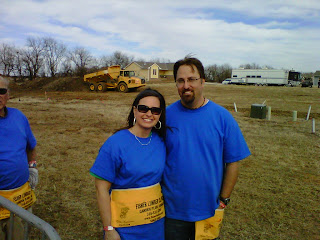 Behind us is where they are digging the basement for the house.   The recipient is Carl Hall, a former WSU baseball player who was paralyzed from the neck down last summer in a car accident.  He has a wife and 4 kids and from what I hear he's a great guy.   Our work was mostly prep work for all the other volunteers.  We set up the barricade fencing for the spectators, built flooring in the catering, volunteer, and VIP tents, and basically did whatever set up was needed.   They expect to have the house finished next weekend.  We are going to try to volunteer again and be there for the "reveal day."
Posted by Oz Runner at 5:31 AM 38 comments:

Oz Runner
I woke up one day after years of inactivity and realized I needed to get in shape. So I took up running, and got hooked. In addition to runner, I'm a dad, husband, christian, guitarist, and avid Kansas State fan.